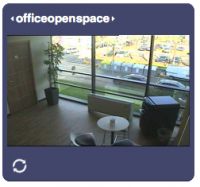 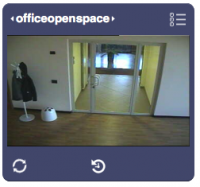 A camera panel with playback 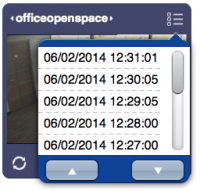 HSYCO is not a traditional NVR.

It's strength is not the raw video performance or storage capabilities, but its ability to seamlessy integrate camera management with other field systems and to create fully customized, web-based user interfaces for integrared camera control.

The key difference between HSYCO and a NVR is that HSYCO doesn't have dedicated CPU, memory and storage resources allocated to the video surveillance functions.

HSYCO's hardware resources are shared with other services, so the actual capacity in terms of frames per second, number of cameras, recording capacity etc. is not fixed, but heavily dependent on the specific application, as well as the HSYCO hardware.

For example, an HSYCO server could support hundreds of cameras, as far as you are viewing and recording from only some at the same time. The frame resolution, size, and the user interface design are all important factors that affect the video performance of HSYCO.

As a starting point, you should expect an overall capacity of handling about 70-100 frames per second for up to 800x600 resolution and about 40KB size frames on an HSYCO PRO server, but this is not guaranteed.

To define the storage requirements for video recording, consider that HSYCO saves full individual JPG frames, at the same size received from the camera. So just multiply the size of a single frame, times the total number of frames you expect to have stored on HSYCO. Usually, most of the disk space on a typical installation is available for video recording. HSYCO tries not to fill its storage above 90%, and stops recording when there is less than 5% free space.

All the key features of a complete video surveillance system are available in HSYCO, with the additional benefits and flexibility of a fully integrated system.

The HSYCO Web based user interface for video cameras display and control is highly configurable, very effective and easy to use from any device running a Web browser. The video streams are optimized to guarantee performance even when connected through a basic 3G network.

Video recording can be triggered by camera-detected motion events as well as by any other event in the connected systems, including the anti intrusion, fire/gas detection and access control systems or door locks.

Recordings can be conveniently browsed using a scrollable pull down list in the video surveillance page.

HSYCO can send e-mails with live or recorded video frames.

The control of orientation, zoom and focus can be smoothly performed by clicking on specific areas inside the camera image.

PTZ cameras pre-set positions can be controlled as well.

HSYCO can create grids of cameras, and display these grids on the web interface, on the display of Snom VoIP phones and digital signage panels.

In order to comply with privacy regulations, HSYCO can be configured to automatically delete all recorded videos after a predefined amount of time - which can be different for each camera.

The recording function can be individually disabled for any video camera.

To reduce the processing load on the cameras and network traffic, HSYCO acquires frames from each camera only in the following cases:

You should configure the cameras to allow anonymous or authenticated access.

User and password information for each camera are configured in the hsyco.ini file.

The camera must be enabled to serve JPEG frames requests coming from the HSYCO server.

<name> is the camera name, corresponding to one of the cameras listed in the Cameras parameter in hsyco.ini.

<id> is an optional parameter that identifies the active zone of the motion area.

This parameter is optional and, if present, is passed as a parameter to the Java method in user.class associated to the motion detection events and can be used at the application level.

The camera must be configured to allow PTZ control from the HSYCO server.

Static cameras are a special purpose type of camera feeds that, instead of the typical frame refresh rate of a normal video camera, present a much slower update of a still image. This is typical, for example, of weather satellite images available on line, or public webcams that are not refreshed as a live camera is.

Using this kind of camera feeds as a normal camera source would cause HSYCO to poll the source with the same frequency used for all other normal cameras, even when the source image only changes just a few times a day, causing unnecessary network and server load.

If Camera.<id>.Type is set to "static", a single HTTP request is sent to acquire the image when a CAMERAREC action is executed. The live camerapanel display will not trigger HTTP requests to the source, but show the last recorded image. Events are grouped per day. For static cameras only, a variable name (starting with $) can be set in the configuration instead of the URL in order to allow dynamic URLs.