Beacons on HSYCO App for iOS

From HSYCO
Beacons on HSYCO App for iOS
Jump to navigation Jump to search
WARNING! The Beacons functionality for iOS is experimental and subject to changes.

This can be used for example to trigger a specific command when a user enters or leaves an area, or to display a relevant information when the user approaches a location.

Each beacon is identified with the following values:

Beacons also have a Proximity property, which describes the distance between the beacon and the user's device. There are two modes of detecting beacons:

HSYCO implements beacon detecting by using the values that identify a beacon to define regions as following:

Each Beacon is defined in hsyco.ini and given a unique Location ID.

e.g. Here is an example of the configuration of a beacon in hsyco.ini

iOS has a hard limit of 20 on the number of regions that can be monitored at the same time.

To work with this limitation, HSYCO App automatically decides which region to monitor, using the following logic:

Monitoring is used to detect entering and leaving regions. When the app is closed and an enter/exit event occurs, it will trigger ranging in background mode for a few seconds. This will in turn call the HSYCO Server LocationBeaconEvent, allowing logic to be applied. The Proximity of each beacon is saved locally on the device, so the LocationBeaconEvent will be triggered with the detected Proximity only when there's a variation. Ranging is always active for all defined beacons when the app is open (in foreground).

See the documentation of LocationBeaconEvent for more information: JavaScript Callback and Java Callback.

Since no more than 20 Zones can be defined in an Area, working with more than that requires setting up the beacon identities in a specific way. Multiple beacons can have the same Zone identifier as long as the UUID is different.

So to cover large areas with a lot of Zones, 20 Zone identifiers can be repeated as long as they do not overlap, which means that at all times only one Zone with a specific identifier should be in range of a device.

Here's an example of how it could work: 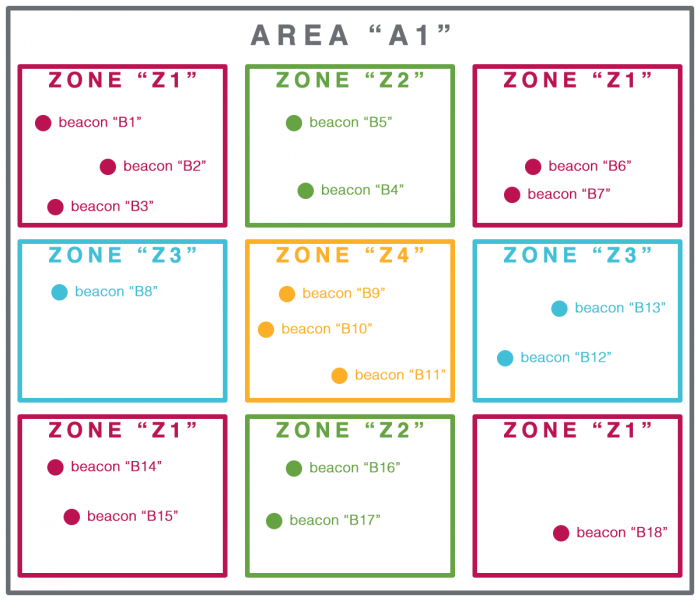 In this example we will set the beacon's identities as follows:

In hsyco.ini or Location Services under Settings: