From HSYCO
Modbus
Jump to navigation Jump to search

HSYCO supports both Modbus TCP and Modbus RTU, acting as a Modbus master in both cases.

This support is implemented as a set of Java APIs that allow read/write functions as described in the HSYCO Programming Handbook, and an I/O Server with a data point representation that you can use in the EVENTS language to poll Modbus data and generate events.

HSYCO supports Modbus RTU over a local serial port, like the one in HSYCO Pi Strato. It doesn't support TCP to serial gateways.

You can also use the FTDI’s USB-RS485 cable, a USB to RS485 level serial UART converter cable incorporating FTDI’s FT232RQ USB to serial UART interface IC device which handles all the USB signaling and protocols. The cable provides a fast, simple way to connect devices with a RS485 interface to USB. 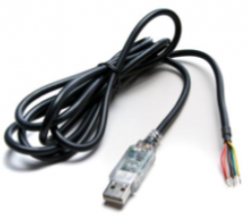 The USB-RS485 cable connects to any USB port of the HSYCO server, and doesn’t require external power supply. It offers an internal 120 Ohm resistor for line termination, and +5Vcc and ground level references that could become handy to connect pull-up and pull-down resistors for lines’ polarization (See the MODBUS over Serial Line Specification & Implementation guide for additional information about line polarization and termination). 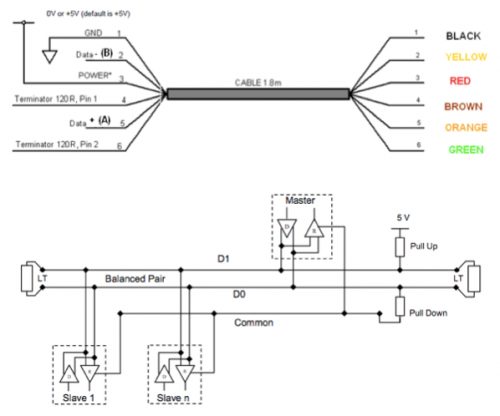 Add a MODBUSTCP or MODBUSRTU I/O Server in the I/O Servers section of the Settings and set its parameters:

When creating the used comm port, its id depends on your HSYCO server configuration, and should be "ttyUSB0" if there are no other devices connected to the USB ports. You could also use the "ftdi-n-n.n" alias, that is unique for each physical USB port on the server.

The Modbus Utility is an application that allows you to easily setup repetitive polling read requests and monitor the performance and status of each request.

Because the Modbus protocol is not asynchronous, but is based on polling, you always have to request a read to tell the driver to actually read the data and eventually generate an event on the associated data point if the data has changed.

When this feature is enabled, the MODBUSRTU I/O Server can be used to directly process Modbus requests from HSYCO applications, while at the same time allowing external access to Modbus TCP clients.

Access to the RS485 bus is synchronised, so that only one request/response can be performed on the bus at any given time. Requests pipelining is not supported.

Multiple clients can be connected the the gateway’s port (default 502) at the same time. If different clients issue multiple overlapping requests, they will be queued for access to the RS485 bus.

In this case, two optional parameters can affect the behaviour of the gateway.

The “tcpgatewaytimeout” option is used to set the maximum timeout to Modbus TCP requests. When a request is recevied from a TCP client and has to be queued because the RS485 is busy, it will wait up to tcpgatewaytimeout milliseconds. Defaults to 6000ms. When set to 0, requests will wait indefinitely until the RS485 bus can be acquired to send a request. A timed-our request will be returned a “0A” error code (Gateway Path Unavailable).

When more than one request is queued, the gateway will process the requests based on the assigned priority, so that a request arriving when another request is already in the queue (i.e. already waiting the completion of the currently active request) could be processed first if it has a higher (lower number) priority, overriding the standard FIFO (first come, first served) logic. Note that, if there are only two clients overlapping their respective requests, these requests would simply be granted alternate access to the RS485, and the priority settings would have no effect.

When the Modbus TCP gateway option is enabled, setting the tcpmodbuseventunitid option to a Unit Id value (0 to 255) will redirect all TCP requests to that Unit Id to the ModbusEvent() callback instead of the Modbus RTU serial bus.

The naming convention HSYCO uses for the events is closely related to the Modbus addressing standards and data types.

The data point names always begin with the same format: ID.unitid.address, where ID is the I/O server id, unitid is the Modbus slave device address, from 1 to 247, and address is the initial register address you are reading.

The supported public function codes are:

Note 1
The big-endian representation means that when a numerical quantity larger than a single byte is transmitted, the most significant byte is sent first.

Reads from 1 to 2000 contiguous coils, using function code 01. Each coil returns a binary value, 0 or 1, in distinct data points, one for each coil.

The <n> value after readcoils: can also be a variable, that will be replaced with its numeric content, for example:

Reads from 1 to 2000 contiguous discrete inputs, using function code 02. Each input returns a binary value, 0 or 1, in distinct data points, one for each coil.

The <n> value after readdiscreteinputs: can also be a variable, that will be replaced with its numeric content, for example:

Reads one data point, using function code 03 to read the appropriate number of registers, based on the data type.

Each reading returns a single value, but you can also use an extended read function to read multiple consecutive values with one single Modbus read function, by adding :<n> at the end of “readholdingregisters:<format>”, where <n> is the number of values.

Reads one data point, using function code 04 to read the appropriate number of registers, based on the data type.

Each reading returns a single value, but you can also use an extended read function to read multiple consecutive values with one single Modbus read function, by adding :<n> at the end of “readinputregisters:<format>”, where <n> is the number of values.

The value after bit: and bits: can also be a variable, that will be replaced with its numeric content, for example:

Writes registers, using function code 06 or 16, based on the data type.

The value after short:, int: etc. can also be a variable, that will be replaced with its numeric content, for example:

The second line sets a text object of the Web interface with the value read from the Modbus device.

Reading several values at once

The first line is a compact form for reading multiple data points.

The first line executes the read discrete inputs function on a Modbus device with address 27, reading two contiguous registers starting at address 1000 and interpreting the first 24 bits as binary values.

The following lines change the color of some objects of the Web interface to green if the bit status is 0 or red if the status is 1.

If the option extendednames was specified in System Settings:

The first line executes the read holding register function for an ushort value on a Modbus device with address 27, reading the registers 1000.

The following line changes the attribute text of a text object setting it to the value just read.

The first line executes the write single register on a Modbus device with address 27, writing the register at address 210 with an unsigned short number.

The second line executes the write multiple registers on a Modbus device with address 27, writing two consecutive registers starting at address 220 with an IEEE-754 floating-point number.

The third line executes the write multiple registers on a Modbus device with address 27, writing four consecutive registers starting at address 230 and four at 240 with a signed long number.

Modbus is a registered trademark of Modbus Organization, Inc.