From HSYCO
LoRaWAN Utility
Jump to navigation Jump to search

The LoRaWAN gateway(s) that will be used need to be configured to forward the received device data frames to HSYCO.

To this end, configure the gateway(s) as standard Semtech packet forwarder(s). Make sure the network configuration allows for the communication with HSYCO and use HSYCO's IP address and the port number specified in the "localport" option for the network server's configuration.

When the gateways are correctly configured, make sure the "Auto-discovery" checkbox is selected under the "Gateways" tab and you will see them appearing in the list: 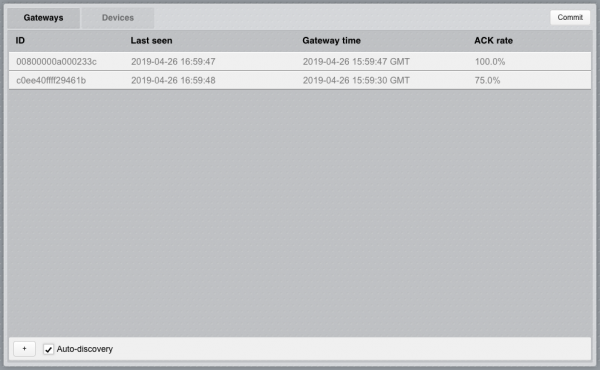 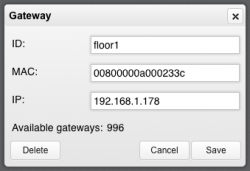 If both MAC and IP are specified, packets received by HSYCO will be considered from this gateway only if both parameters are matching. It is possible to omit (leave blank) MAC or IP, in which case the packets will be filtered only by the specified parameter. E.g. if only MAC is specified, received packets containing the same MAC address will be assigned to this gateway regardless of the IP address they were sent from. This configuration can be useful when, for instance, the gateway is configured with DHCP and the IP address is dynamic.

After saving the configuration the gateway will no longer be greyed-out in the list: 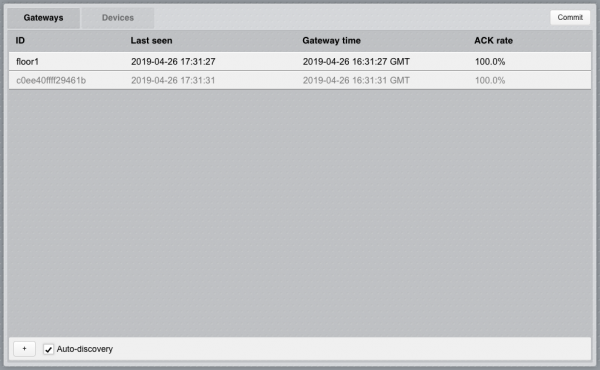 To manually add a gateway click on the "+" button at the bottom-left corner of the page.

To remove a gateway, click on it from the list, click on "Delete" and confirm. If the auto-discovery is enabled, the gateway will reappear upon the next received packet from it.

Disable the auto-discovery when all the required gateways have been configured.

To configure the LoRaWAN end devices to be used with HSYCO, select the "Devices" tab and enable auto-discovery ("Auto-discovery" checkbox).

LoRaWAN devices transmitting data within the range of the listed gateways (configured and discovered) will appear in the list: 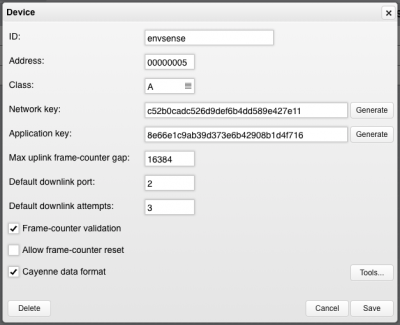 After saving the configuration the device will no longer be greyed-out in the list: 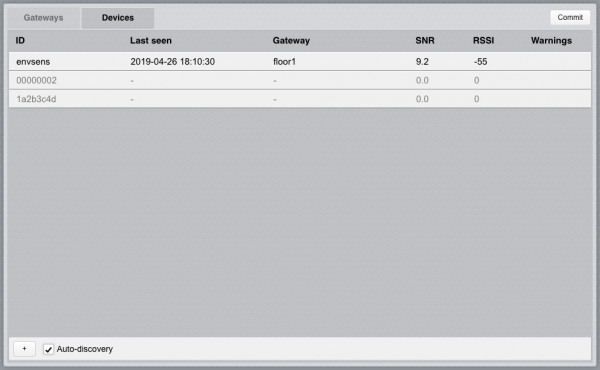 To manually add a device click on the "+" button at the bottom-left corner of the page.

To remove a device, click on it from the list, click on "Delete" and confirm. If the auto-discovery is enabled, the device will reappear upon the next received frame from it.

Disable the auto-discovery when all the required devices have been configured.

The tools panel offers a set of functionalities to help setting up a device and testing data transmission. To access the panel, click on the "Tools..." button from the configuration panel of a device. 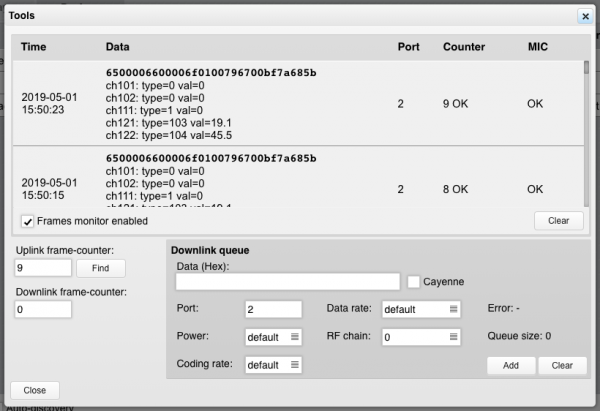 Select the Frames monitor enabled checkbox to see the received uplink frames from the device in the top list.

This field shows the saved server-side uplink frame-counter for this device. Manually enter a value to edit it. If never set and no frame has ever been received it is set to -1.

Devices use an internal 32 bit counter for sequence validation, frame encryption and MIC computation, but only the least significant 16 bits are sent in frames. This means that the server needs to "guess" the value of the high bits to be able to decrypt the data and it does so by assuming an always increasing counter between subsequent frames.

If the received frames show a MIC error, it might be necessary to align the server counter with the device counter. To this end, click on the "Find" button: HSYCO will try all possible high bits for the counter of the last frame until a valid MIC computation is found and the new counter is shown and set. If no valid match is found an error message is shown, in this case check the network key.

This field shows the saved server-side downlink frame-counter used for sending frames to this device. Manually enter a value to edit it. If never set and no frame has ever been sent it is set to -1.

Use this panel to test downlink communication to the device.

Enter the data in hexadecimal format or select the "Cayenne" checkbox to create a Cayenne-encoded frame with the specified channel number, type and value. See LoRaWAN#Cayenne_LLP_format for values formats.

Specify the transmission parameters or use the default values to have them dynamically selected based on the received frames.

Click on "Add" to enqueue the packet, you'll see the queue size increase and then decrease again when the packed is delivered to the gateway. If errors occur they will be shown.

Click on "Clear" to remove unsent packets from the queue.

When all gateways and devices are configured (not greyed-out in the lists), click on the "Commit" button on the top-right corner of the main page. The configuration will be persisted and the LoRaWAN I/O Server will restart with the new configuration.