The Samsung Smart TV driver for HSYCO allows you to control most recent Smart TV models from HSYCO web interfaces and application logic.

The driver can send most of the remote control commands, and a few extra commands not present on the remote, but can’t turn on a TV. The driver is basically one-way, it sends commands but doesn’t have any information of the current state of the TV, it only knows if the TV is on and can accept commands from HSYCO.

When you initially configure the Smart TV I/O server in HSYCO and the server restarts, you should have your TV on. The TV will then show a message asking to accept connections from HSYCO.

We can’t provide a list of Samsung Smart TV models that work with this driver. In general, models released between 2012 and 2014 should work. We do not guarantee that this driver will work with any specific model and firmware version.

Add a SAMSUNGTV I/O Server in the I/O Servers section of the Settings and set its parameters:

Most Samsung Smart TV models should accept the following command codes. Other undocumented commands may also be supported.

You can easily associate any user button to a specific command to be sent to the TV. Set name to the I/O Server name and param to the command code. 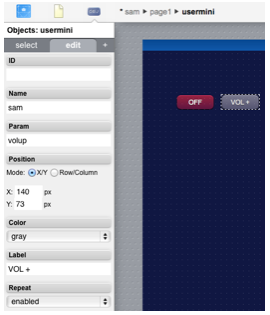 You can also enable the Repeat mode, so that multiple commands will be sent to the TV while the button is pressed.

Change source to HDMI when dummy light is turned on.

Samsung and Samsung Smart TV are either trademarks or registered trademarks of Samsung Electronics Co., Ltd.