From HSYCO
Tridonic
Jump to navigation Jump to search

The DALI SCI2 interface module communicates with HSYCO through a RS-232 interface.

Further, the RS-232 signals RTS and DTR must be set to the following levels:

Refer to the SCI2 manual for installation, wiring and power supply requirements.

The DALI RS232 PS/S interface module communicates with HSYCO through a RS-232 interface.

Please refer to this table for the wiring:

An illustrative scenario for a DALI architecture looks as follows:

On one BUS, there can be up to 64 dimmers, addressed from 0 to 63, organized in up to 16 groups (0 - 15) or individually addressable. The driver also includes the support for the MSensor 2.0 motion detector and photometer functionalities. The MSensor 2.0 can be configured to work in two different modes:

Add a TRIDONIC I/O Server in the I/O Servers section of the Settings and set its parameters:

The systemtopo.txt file contains the list of all dimmers, groups and the broadcast address that could be directly associated to graphic objects in the Web-based user interface. This file can be filled manually or automatically by HSYCO at start-up. To enable automatic discovery and automatic generation of devices’ information in the systemtopo.txt file, set the 'discovery' option to true.

You should then manually add comments and other optional parameters:

Note 1
Only available if the MSensor is configured to work in Direct-master mode (default mode).

Note 2
Only available if the MSensor is configured to work in Indirect-master mode.

Note 3
The 2-byte DALI frames consist of an 8-bit address part and an 8-bit command part.

The address byte is formatted as follows:

Other than the above described commands, it is possible to send the following 2-byte DALI frames:

The value of the events ID.command and ID.monitor is expressed as a 4-digits string “XXYY” representing the hexadecimal value (upper case letters) of the two bytes. For instance, to send the command 00 to the group 1 of our system “tr”, the following syntax will apply: tr.command = 8300

All the devices that have been defined in the systemtopo.txt database are automatically listed in the Web Editor. Adding a slider to control a dimmer requires just a few clicks and no additional EVENTS logic. 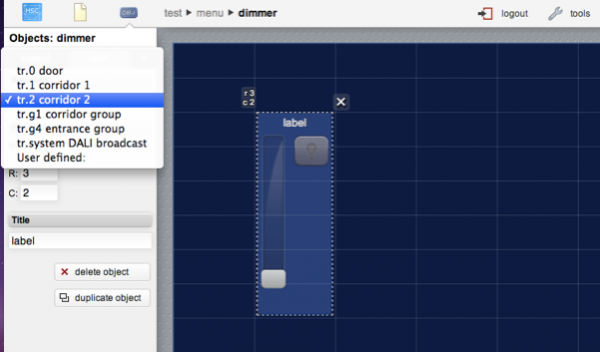 Tridonic is a registered trademark of Tridonic.